Skip to content
Free shipping for all Australian orders over $70

Understanding the different methods of drug testing available is important to help select the best approach for your workplace.

When someone consumes drugs, alcohol or medications these substances are processed by the body and can be detected later in the person’s body fluids.  Traces of drugs or their metabolites (break down products) can be found in a donor’s blood, urine, oral fluid (saliva) and hair.

Anyone who is under the influence of medication, illegal drugs or alcohol poses a potential risk. The extent of their impairment is difficult for others to assess. If an intoxicated person makes a mistake, it can have dangerous consequences for themselves as well as their co-workers, customers and work equipment. A workplace accident is not only a threat to the safety of employees, but can also result in considerable damage to a company‘s reputation.

Despite this, drug and alcohol testing in workplaces can be a contentious issue.  Understanding the types of testing available and the testing process is important to help select the most appropriate testing method for your workplace.

The two most commonly used methods for drug testing in Australia are urine testing and saliva testing.  Each of these methods offer different advantages and limitations.  Understanding these testing methods assists in selecting the most appropriate testing method in workplaces settings and for other applications.

What drugs can be tested for?

Workplace testing standards in Australia indicate testing for the most commonly abused illicit and prescription drugs.  All of these drugs have the potential to cause impaired performance, reaction times and judgement.  Other drugs may be tested for depending on the circumstances.

What is a window of detection?

Each sample type provides evidence of drug use over a different time period. Some drugs can be detected in oral fluid immediately after use, due to the drug being deposited in the oral cavity during use (eg: Cannabis). Drugs also enter the saliva quickly from the blood and can be detected within minutes of use.

Once the drugs have been processed by the body, they begin to appear in the urine often as metabolites.  This process results in a delay in detection in urine of approximately an hour or more. Urine testing, provides a medium time period for drug detection, but varies significantly from drug to drug.

For example, Amphetamines, Cocaine and Opiates may be detected in urine samples from 3-4 days after use, whereas benzodiazepines may be detectable for 2 weeks.   Cannabis metabolites are highly variable, depending on patterns of use and can be detected anywhere from a few days to a month after last use.

Hair testing provides the longest window of detection (up to 6 months).  Hair testing can be used when a history of drug use is required, but does not provide information about recent use because it takes approximately 14 days for drug traces to appear in the hair.   As the hair grows from the scalp, 1cm of hair equals approximately 1 month of drug use.

What factors impact the window of detection?

Windows of detection are always a guide only and will vary from person to person.  Numerous variables influence an individual donors window of detection after drug use.  Some of these include:

Windows of Detection for Saliva and Urine 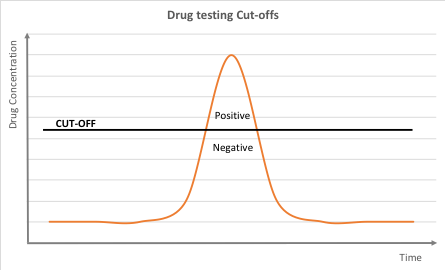 What is a Cut-off?

The cut-off is a key element of drug screening.  The cut-off is the threshold, or drug concentration in a sample used to separate the negatives from the positives (non-negatives).

A screening test is a quick test to check the absence or possible presence of drugs.  Screening tests generally identify a class (or group) of drugs, rather than individual substances.  They do not indicate how much of a substance is present, but whether a class of drugs has been identified above a certain Cut-off.  The screening test may be carried out with the donor (point-of-care/on-site) or in the laboratory depending on the type of sample, and the type of testing required.

On-site screening tests offers significant advantages to workplaces or roadside when reliable and accurate test kits are used.  Most on-site screening tests for drugs are based on immunoassay technology.  Getting a result within minutes of taking the sample allows people to assess and act on the safety or health risks immediately.  This is an essential tool for many workplaces.

For work place drug testing or law enforcement drug testing, if the initial screening test indicates the presence of a substance (non-negative), a secondary sample must be sent to the laboratory to obtain definitive, legally defensible results.   The confirmation test is carried out using a highly sensitive and specific method such as LC/MS (Liquid chromatography/Mass spectrophotometry).  The confirmatory report will identify exactly what drug is present and how much is in the sample.  It is able to distinguish between medications and illicit substances.  Robust chain of custody protocols must be applied to the confirmatory sample collection process to ensure the integrity of the sample.  Using a NATA accredited laboratory ensures the highest standard of results, allowing critical decisions to be made legally and fairly.

Saliva drug testing – or swab testing – offers numerous benefits to testing programs due to its ease and speed of collection.  Saliva testing is indicated where detection of recent use and the potential for impairment is important. Saliva testing will detect drugs that have been consumed in the last 24 hours, during the timeframe that impairment is most likely.   This method of testing is most closely aligned to blood testing.   This is why saliva testing is used by police in roadside testing Australia-wide.

Urine drug testing is considered more intrusive and can be subject to adulteration (tampering), however the longer window of detection means it is particularly useful for certain testing applications such as pre-employment testing where a longer historical view is beneficial in assessing an applicant.  In addition, there tends to be a wider range of drugs tested for which can be important in certain fields such as rehabilitation or drug monitoring programs.

Hair testing is a less commonly used method of drug and/or alcohol detection due to its relatively invasive nature. The long window of detection and historical view makes this method particularly applicable in industries where monitoring of long term or complete abstinence from drugs or alcohol is required.

Hair testing can also be conducted to fulfil court orders or for individuals wishing to demonstrate abstinence from drug or alcohol use.

Want to know when we post more? Subscribe to our blog. We promise we wont spam you.

We will send you exclusive discounts & updates from BMF 100% free. You can unsubscribe any time!

We promise we wont spam you.